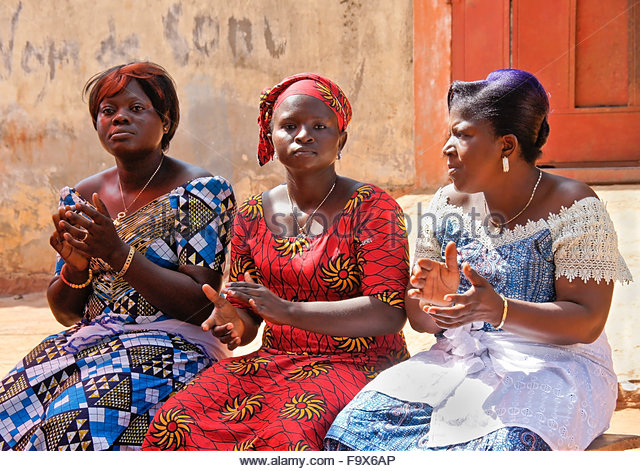 In Lomé, Togo, Ewe market women undertook similar types of political action and resistance as their Nigerian and Ghanaian counterparts. However, the Ewe herstory is little known. Between 1932 and 1933, the market women were provoked into action by a vacuum of power created by a political stalemate between three male-dominated political groupings that were incapable of resolving the impasse created by new taxes.

Following the defeat of Germany in 1918 at the end of World War I, Togo, then a German protectorate, was divided between France and Britain. The larger portion of the country, including the capital, Lomé, was placed under French colonial control.[1] The three male political groupings were the French administration under the leadership of the Governor De Guise, the Conseil des Notables and the Duawo. The Conseil des Notables was the local council system created by the French administration. It consisted of 30 leading men and chiefs and aimed to legitimize the ‘democratic’ voice of the indigenous population. The Duawo was set up to act as an intermediary between the Conseil and the general population.  The period was thus characterized by a struggle for urban political authority by these three groups.

Under the French administration and in the context of the Great Depression, high tax burdens were severely straining the poorest classes. The market space was primarily the domain of women.  However, the colonial authority began to encroach on the market space itself, trying to control and reorganize women’s operations. This included changing the cycle of the market from four to five days and threatening to license market stalls and introduce income taxation from which market women had been exempt.

To understand the context of the women’s revolt, it is important to look at the actions of the political groupings.  The French administration ordered the introduction of the new system of taxation.  A petition from members of the Conseil had no effect.  The much ‘younger’ Duawo then went over the Governor’s head and wrote a letter to the minister of colonies raising the possibility of unrest.  This increased tensions amongst the political power players.  Despite this, the new income tax policy came into effect on 2 January 1933, and collectors began to implement it. Instead of heeding the demands of Duawo, the authorities arrested two of its leaders in an attempt to stem potential unrest.

The women’s revolt came in the wake of the failure of the male authorities to protect women’s interests and concerns.  Within an hour of the arrest of the two leaders of Duawo, as if from nowhere, market women (some with children) converged on the city from the various markets in and outside it, finally congregating outside the prison. Marching, dancing and singing, the women chastised and threatened the French authorities and their African collaborators.[2] The protestors (three to five thousand people, 80 per cent of whom were women) prepared themselves for an all-night vigil, moving from the prison to the Palais du Gouvernement (government headquarters). The tone of the protest became more menacing and stones crashed through the windows of the palace, resulting in the police firing blanks into the air.  As the threat of bloodshed increased, the Governor authorised the release of the prisoners, which effectively ensured that the crowd dispersed with their leaders.

Although the protest was immediately successful in securing both the release of the two Duawo leaders and the suspension of tax increases, the Ewe women recognised that their power was marginal in comparison with the evolving French colonial state.[3] Calm reigned for several days before numerous violent incidents began against local women and men. The violence and looting also angered the women, who saw it as their responsibility to oversee the purification of a city polluted by violence and death.[4]

The final straw was the trial and sentencing of those involved in the violence and those participating in Duawo. In court briefs, guilt was ascribed to entire villages and neighbourhoods, so that not only individuals but also entire ‘collectives’ were punished for their roles in the violence. Men and women were collectively made to pay thousands of francs in fines and subjected to many thousands of days of forced labour.

Once again, women reverted to their indigenous references and symbols of moral authority. During the wave of protests in Lomé in 1933, women marchers also invented several songs and chants. The leaders among the market women’s community sustained the overall cohesion of the protest. Displays of vulgarity typically were used not against the French but against other Africans considered to be complicit with the colonial powers.

Women’s action in these instances were in response to what they considered the failure of the political authorities to take effective action to address the women’s economic concerns, restore peace and security.  The marketplace, believed to be home to many spirits, had been desecrated and many women viewed the threat of taxation as the underlying cause of voudoun (spirit) anger. They felt that a curse had been placed, and thus a cleansing ceremony was required.  Failure to appease the voudoun (spirit) was unthinkable.

Despite the women’s traditional week-long cleansing ceremony, there was still considerable tension and sadness. The repeal of the new taxes, coupled with the cleansing ceremony, was not enough to appease the voudoun (spirit).[5]  The women felt that looked to the French who they considered to be the true offenders to provide further appeasement.  Thus, when a few months later the commandant de Lomé, Fréau, proposed the renovation of a park in the centre of the city, many local residents interpreted the gesture as an effort at reconciliation.

Understanding the women’s revolt
One of the most significant aspects of the Ewe women’s revolt is that there were no previous records of women’s individual or collective confrontation of power in Lomé.  Thus, women in many ways were considered adverse to collective social action, yet, the moment women’s economic power and self-determination was threatened, the women organized themselves and resolved to close all markets in the capital until their demands were met.

Another key factor is the political resolve evident in the actions of the women in the face of the inability of competing power groups to protect their rights and interests.

Finally, the women’s response when considering the overall well-being and once again the use of religious and cultural symbolism to direct and disrupt processes of patriarchal power is admirable, and illustrative of the importance of context, moment and also applicability of strategies for social change. Rooted in women’s power to shame and embarrass, women demonstrated that this authority vastly outweighed the direct political leverage they sought via male dominated leadership structures of both the Duawo and the Conseil. This is a clear example of how a women’s movement used traditional cultural practices, like voudoun, as a vehicle of protest and as a means to claim their own political authority.

Over a period of several decades, Ewe women in the flourishing market communities solidified commercial ties and cemented their role as familial providers. Cyclical market schedules were responsible for the daily revenue that placed food on the table, while a tax-free status facilitated accumulation for other provisions. At the same time the patterns that developed became identifiable with women, especially cross-border-trading Ewe women. Their economic roles carried over into their gender and religious identity. They began to feel entitled to certain structures—elements such as free border passage, favourable customs treatment, and tax-free status. In revisiting these cultural and gendered actions, Ewe women’s political authority was dynamic, threatening and highly successful on many levels.[6]

The long-term consequences of this protest were many. The protest was indicative of the complex and evolving role of women within the wider social and political power networks in the city of Lomé. It was a key part of their move from a position of cultural-social power exerted by recourse to vodoun to what could be loosely described as moral guardianship. What is certain is that even today, in their own way, the major market women of Lomé still ‘own’ the city.