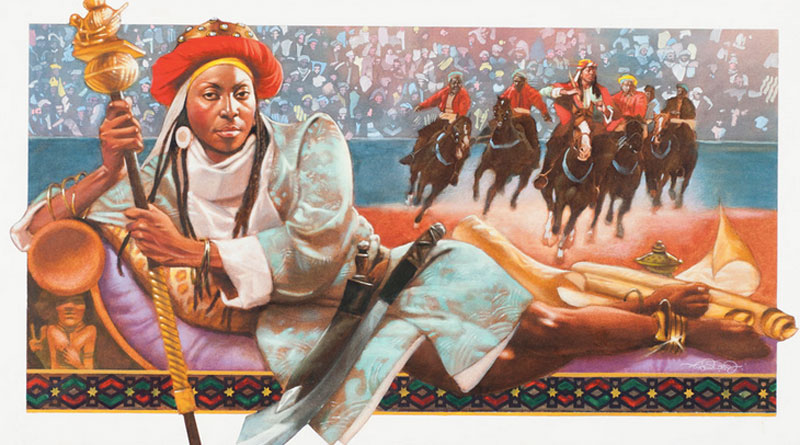 Commonly known as the warrior queen, Queen Amina of Zaria was the first woman to become the Sarauniya (queen) in a male-dominated society. She expanded the territory of the Hausa people of north Africa to its largest borders in history. Much of what is known of Queen Amina is based on information related in the […]

Commonly known as the warrior queen, Queen Amina of Zaria was the first woman to become the Sarauniya (queen) in a male-dominated society. She expanded the territory of the Hausa people of north Africa to its largest borders in history. Much of what is known of Queen Amina is based on information related in the Kano Chronicles. Other details are pulled from the oral traditions of Nigeria. As a result, the memory of Queen Amina has assumed legendary proportions in her native Hausaland and beyond.[1] The modern state of Nigeria has immortalized Amina by erecting a statue of her, spear in hand, on a horse, in the centre of Lagos.

The seven original states of Hausaland—Katsina, Daura, Kano, Zazzau, Gobir, Rano and Garun Gabas—cover an area of approximately 500 square miles and comprise the heart of Hausaland. In the 16th century, Queen Bakwa Turunku, Amina’s mother, built the capital of Zazzau at Zaria, named after her younger daughter. Eventually, the entire state of Zazzau was renamed Zaria, which is now a province in present-day Nigeria.[2]

Amina was born around 1533 in Zaria. She lived approximately 200 years prior to the establishment of the Sokoto Caliphate federation that governed Nigeria during the period of British colonial rule following the Islamic jihad (holy war) that overtook the region in the 19th century.  She was born to the ruler, Bakwa of Turunku, who lived in the city state of Zazzau.  The family was wealthy as a result of trading in imported metals, cloth, cola, salt, horses and imported metals.  When her father died in 1566, the crown was conferred upon Amina’s younger brother, Karama.  Although her father’s reign was characterised by peace and prosperity, Amina nonetheless chose to spend her time honing her military skills with the warriors of the Zazzau cavalry.  This led to her eventually emerging as a leader of the Zazzau cavalry, during which time she accumulated great wealth and numerous military accolades. Upon the death of her brother after a 10 year rule, Amina had matured into a fierce warrior and earned the respect of the Zazzau military, so she was able to assume the reign of the kingdom.[3]

The context of Queen Amina’s leadership was pre-colonial Nigeria, where men did not feel threatened when women were in powerful positions, as it was usually understood that they deserved to be there because of age, kinship or merit, not gender. Women could even oust men who were not performing their duties effectively. While socially and economically, pre-colonial Nigerian societies clearly delineated women’s and men’s roles this did not preclude women from asserting their authority or themselves.[4]

At the time of Amina’s reign, Zazzau was situated at the crossroads of three major trade corridors of northern Africa, connecting the Sahara with the remote markets of the southern forest lands and the western Sudan. The rise and fall of the powerful and more dominant Songhai people, and the resulting competition for control of trade routes, incited continual warring among the Hausa people and their neighbouring settlements during the 15th and 16th centuries.[5]

In the continual competition for power among the Hausa states, Zaria for a time achieved predominance under Queen Amina.[6] ‘[She] led her first military charge a few months after assuming power. For the rest of her [34 year] reign, she continued to fight and expand her kingdom to [its] greatest in history.’[7] Heading up an army of 20,000 men, she tried to annex several surrounding cities up to Nupe, and ruled Kano and Katsina at the cost of 34 years of almost uninterrupted warfare.[8] The objectives of her conquests were twofold: extension of Zazzau beyond its primary borders and reduction of conquered cities to vassal status.

The expansion of Amina’s kingdom made it the trading centre for all of southern Hausaland, spanning the traditional east-to-west trans-Saharan axis and guaranteeing Zaria’s prosperity. Amina brought unheard-of wealth to the land; one description cites a tribute payment of 40 eunuchs and 10,000 kola nuts. ‘She boosted her kingdom’s wealth and power with gold, slaves and new crops. Because her people were talented metal workers, Amina introduced metal armour, including iron helmets and chain mail, to her army.’[9]

Amina is also credited as the architect of the strong earthen walls around the city, which became the prototype for the fortifications used in all Hausa states. She built many of these fortifications, later known as ganuwar Amina or ‘Amina’s walls’, around various conquered cities. Many of these walls remain in existence to this day.

Walling was a vitally important consideration in the development of African urban life. Walls gave definition to settlements and prevented uncontrollable sprawl. They also provided psychological and physical security. In unstable times, they afforded protection against theft or destruction and in peacetime, they controlled entry and exit.

Also, politically, walls were considered prestigious, their size a measure of a ruler’s ability to command the labour of his or her subjects. The walls constructed by Queen Amina of Zaria not only protected Hausa markets from external threats emanating from the south, but also became an enduring testimony to her glorious reign.

According to legend, Amina refused to marry and instead took a temporary husband from the legions of vanquished foes after every battle.[10]

Legend also [records] that she died during a military campaign at Atagara near Bida in Nigeria. Her exploits earned her the moniker ‘Amina, daughter of Nikatau, a woman as capable as a man.’ Her legendary escapades made her the model for the television series Xena: Warrior Princess. Today, her memory represents the spirit and strength of womanhood.[11]

Queen Amina undoubtedly managed to forge and imprint a legacy that contradicts all stereotypes of women’s leadership in patriarchal African societies, where the inequality that women face affects virtually all aspects of society.[12] There is significant evidence that women were allowed to make ample contributions to the social, political and economic structure of their societies in pre-colonial Nigeria, if not with the same clout as men. Where they were prevented from being openly active, women used loopholes inherent in their social structures to gain and maintain some level of power. This changed to a large extent with the advent of Islam and, later, British colonial rule, causing women to suffer important setbacks.[13]

The obstacles facing women in Nigeria and across Africa may persist, yet the legacies and examples of women such as Amina point to the possibilities that exist for African women to reshape the destinies of their societies and communities.