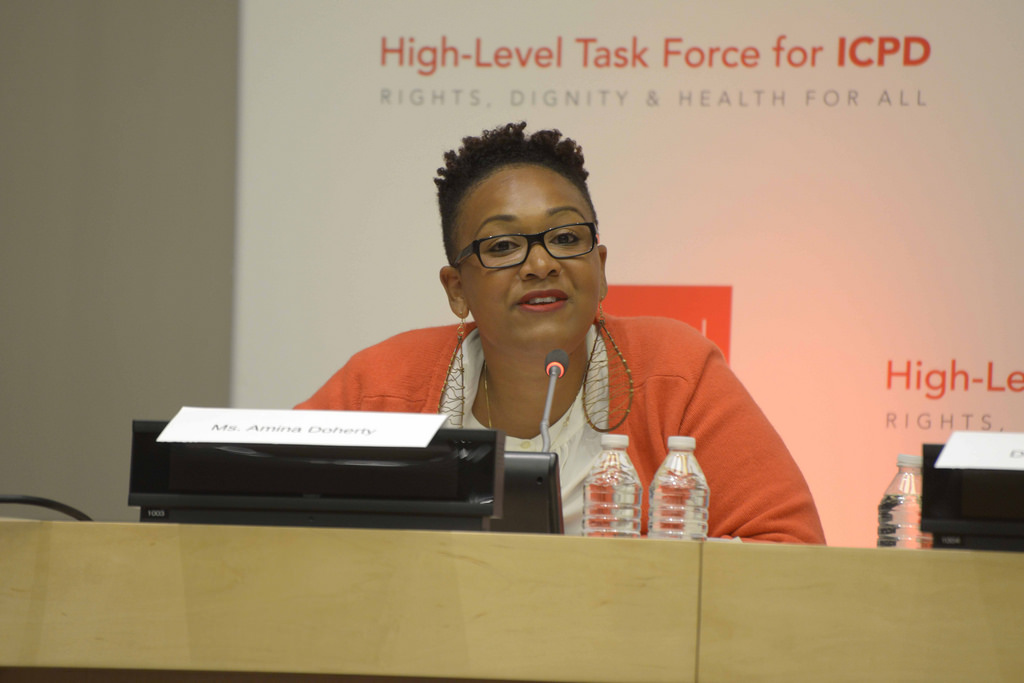 STATEMENT FOR THE HIGH-LEVEL EVENT ON THE CONTRIBUTIONS OF WOMEN, THE YOUNG, AND CIVIL SOCIETY TO THE POST-2015 DEVELOPMENT AGENDA

Statement by Amina Doherty, on behalf of the Women’s Major Group Introduction 1. Mr. President of the General Assembly, Excellencies, Distinguished Delegates, Ladies and Gentlemen: Good Afternoon. 2. The Women’s Major Group consisting of over 500 organizations greatly welcomes the background note for this high-level event, calling for full participation of women, youth and civil […]

Statement by Amina Doherty, on behalf of the Women’s Major Group

2. The Women’s Major Group consisting of over 500 organizations greatly welcomes the background note for this high-level event, calling for full participation of women, youth and civil society in the post 2015 agenda, and addressing the barriers of inequalities, discrimination and marginalization.

3. It is an honour to share with you some reflections and recommendations as a young Pan-African feminist and a proud member of the African and Caribbean women’s movements. Before I do, I would like to acknowledge the millions of women and girls who are not here today but whose lives and struggles and whose fierce commitment to freedom, justice and equality have positioned me here. I do not speak ‘for’ but as ‘part of’ half of the world’s population, and the largest generation of young people in history, who together with women and girls of all ages have stood at the frontlines of public squares and on the streets mobilizing, organizing, calling for freedom, justice, accountability, equality, and self-determination.

4. To echo the words of former President of Burkina Faso Thomas Sankara who in addressing the General Assembly in 1984, the year I was born, said that “meaningful social transformation would not endure without the active support and participation of women.”Thirty years thereafter, we reconvene in the same space calling for goals in the post-2015 era that place women’s human rights, gender equality and empowerment at the cornerstone of development.

Earlier this week at the 9th session of the Open Working Group on the Sustainable Development Goals, we were deeply disappointed that women’s human rights were completely absent from the proposed focus areas.  Equality and empowerment are necessary, but alone they are not sufficient and cannot be achieved without firm commitment to and fulfillment of women’s human rights. It would be unthinkable to consider a ‘new’ post-2015 development agenda that does not recognise women’s human rights and existing commitments. We will hold our governments fully accountable to all existing international commitments, and we will not accept regression.

I would like to further emphasise that human rights are universal and that the cultural legacies of colonialism should not be used as an excuse to undermine the human rights of women and in particular LGBTIQ peoples. We should, in the years ahead, seek to strengthen human rights and freedoms and the new agenda should build on and advance international agreements such as Rio, Vienna, Cairo and Beijing.

On your questions, President Ashe, of how to address the rights of women and how to reduce inequalities and discrimination at all levels, we call for an approach that prioritises a stand alone goal for achieving gender equality, women’s empowerment and women’s human rights alongside the integration of women’s rights into each of the other goals.

This would, we believe, address the discrimination against women that exists in the laws of at least 120 countries as the World Bank has identified. This standalone goal must have, as part of its content:

In response to your question on how we can ensure active, full and meaningful engagement of women, young people and civil society in the design, elaboration and implementation of the Post-2015 agenda:

On the design of the agenda, we recognise the critical importance of women’s participation in this process.  Hundreds of women-led solutions from women’s movements have already led to some of the most fundamental shifts in knowledge and thinking around social, environmental and economic justice, human rights and sustainable development. From co-operatives and social solidarity economy initiatives, to women advocates participating in expert meetings and multilateral meetings in fora such as this, to ICT’s, crowdsourcing platforms and women’s funds, it is crucial to recognise this leadership, knowledge and expertise. Women’s and civil society’s right to participate in local, national, regional and international decision-making processes must be fully supported and fulfilled.

We also recognise that UN Women is a critical agency for advocating for women’s and girls rights, and we insist that it have adequate support to fulfil its functions.

On the elaboration of the agenda while defining a strong standalone goal and the integration of gender equality and women’s rights into all the other goals, we must also recognisegender inter-linkages. These include the grave threat that climate change and environmental degradation poses to women worldwide, as women are the majority of agricultural workers and are the most vulnerable to natural disasters. We reaffirm calls for ecological and agricultural sustainability, food and water sovereignty and security, the entitlement of climate change-affected countries to compensation for loss and damage, and the foundational principle of common but differentiated responsibility. The development needs of SIDS are particularly urgent, given the existential threat they face from climate change.

States must also address violations against Women Human Rights Defenders (WHRDs) perpetrated by state and non-state actors which severely threaten the future effectiveness of women’s organisations and other CSO’s, and require a diversity of urgent responses addressing the specific situations and contexts.

On the implementation of the agenda, we recognise that all of our work will amount to mere rhetoric unless the necessary resources are mobilised, and the international trade and finance architecture support Member States to use those resources for sustainable development. We therefore call on States to recommit to targets for official development assistance, and for a recognition of the crippling effect of sovereign debt on developing countries’ abilities to achieve the SDG’s. Trade and investment liberalisation has curbed the ability of States to implement rights-based, development-oriented policies as they’re caught in a regulatory race to the bottom. In this race labour standards are the first to be compromised and women who are the most vulnerable workers stand to lose the most.

The trade and finance framework has also led to the extreme concentration of wealth, whereby the richest 85 people have the same amount of money as the bottom 50% of the world’s population. The role of the private sector in creating or exacerbating many of these patterns must be recognised. One example is tax evasion by big businesses–in 2013, African countries lost twice as much in illicit capital flows as they received in aid. Unlike States, corporations are not required to invest in global public goods, and States must therefore remain the central actors in implementation.

To ensure meaningful progress and inclusive development, a robust accountability framework is needed at all levels: nationally, regionally and globally. Any new model for international accountability must require public and private reporting and an effective enforcement mechanism. States must be accountable for the advancement and realization of women’s human rights, gender equality and women’s empowerment in compliance with international human rights agreements and standards.

As former Grenadian Leader Maurice Bishop once said: ‘Forward Ever, Backward Never!’ or as we say in the Women’s Movements: ‘A Luta Continua!’

Help us grow our library of useful tools and information.