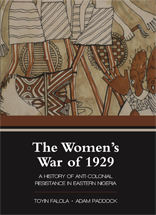 An important act of women’s resistance in Nigeria’s history is the Igbo women’s ‘war’ of 1929, which centred around market women’s opposition to unfair taxation and indirect rule in southern Nigeria by the British colonial authorities.

Before the British colonised southern Nigeria in 1884, Yoruba and Igbo women in the region had powerful political, judicial and religious roles within dual-sex systems of female and male authority. Power was shared between men and women in such a complementary manner to promote harmony and the well-being of the societies. In pre-colonial Igboland, social roles and responsibilities were the channels through which power diffused, and hierarchical relationships were determined by age, experience, ability, marital status and rites of initiation. Women exercised direct political power (though less than men) through all-female organisations, which included women’s courts, market authorities, secret societies and age-grade institutions. They wielded collective and individual power both as members and as heads of these organizations. However, the colonial period brought about the marginalisation and even erosion of female political power and authority in the region.