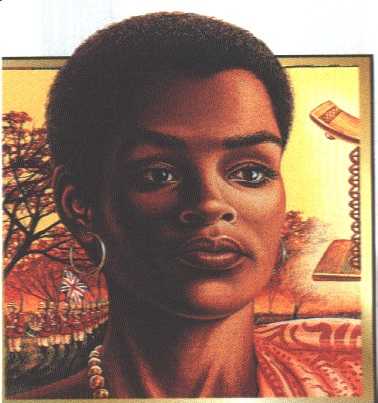 Yaa Asantewaa of Ejisu is celebrated for her leadership role in resisting British colonization in the Gold Coast, now modern-day Ghana. She stood up to fight the British occupation in West Africa in spite of an initially cowardly response up by local men, which puts her in the league of Africa’s great women leaders. Yaa […]

Yaa Asantewaa of Ejisu is celebrated for her leadership role in resisting British colonization in the Gold Coast, now modern-day Ghana. She stood up to fight the British occupation in West Africa in spite of an initially cowardly response up by local men, which puts her in the league of Africa’s great women leaders.

Yaa Asantewaa was born in 1840 as the sister of the ruler of Ejisu (Ejisuhene), an ethnic group in present day Ghana. Asantewaa was appointed queen mother by her brother, Nana Akwasi Afrane Okpase, whose reign was volatile. At the time, the Gold Coast was under British protectorate. The British supported their colonizing campaigns against the Asante with taxes levied upon the local population. In addition, they took over the state-owned gold mines, thus removing considerable income from the Asante government. Missionary schools were also established, and the missionaries began interfering in local affairs.[1]

When the Asante began to rebel against British rule, the British attempted to put down the unrest. During her brother’s reign, Yaa Asantewaa saw the Asante Confederacy go through a series of events that threatened its future, including a civil war that lasted from 1883 to 1888. Akwasi, her brother, died thereafter.[2] Following his death, Yaa Asantewaa, being very influential as queen mother,  nominated her grandson as ruler of Ejisu. In 1896, this grandson and the king of the Asante (Prempeh I) were exiled by the British—then a common tactic for dealing with African kings—after which Yaa Asantewaa became regent of the Ejisu-Juaben District.

Further worsening matters, the British governor-general of the Gold Coast, Frederick Hodgson, demanded the Golden Stool of the Asante. The Golden Stool was the Asante throne and a symbol of Asante independence.[3] Colonial officials were sent out to find the stool by forcing the people to reveal where it was hidden. After going from village to village with no success, one British official found at the village of Bare only children, who said their parents had gone hunting.[4] He ordered the children to be beaten. When their parents came out of hiding to defend the children, he had them bound and beaten too. This prompted a conference of the elders. Yaa Asantewaa was highly disgusted at the behaviour of her male counterparts and insisted that if they would not fight for the land, she would gather the women to do so. Thus Yaa Asantewaa led the famous Asante uprising in 1900 against the British.

In March 1900, Yaa Asantewaa mobilized Asante troops, and for three months laid siege to the British mission at the fort of Kumasi. The British had to bring in several thousand troops and artillery to break the siege. In retaliation, they plundered the villages in the area, killed many people, confiscated their lands and left the remaining population dependent upon them for survival. After several months, the Gold Coast governor eventually sent a force of 1,400 to quell the rebellion, during which Queen Yaa Asantewaa and 15 of her closest advisers were captured. They too were sent into exile in the Seychelles.[5] The rebellion represented the final war in the series of Anglo-Asante wars, which lasted throughout the 19th century. On 1 January 1902, the British were finally able to accomplish what the Asante army had denied them for almost a century: the Asante empire was made a protectorate of the British crown.[6]

Yaa Asantewaa remained in exile until her death 20 years later on 17 October 1921. Her dream of a nation free from British rule was realized on 6 March 1957, when the Asante protectorate gained independence as part of Ghana, the first African nation to achieve this feat.

Her legacy
Despite the scarcity of records, Yaa Asantewaa’s legacy is clear. She was the last African women to lead a major war against the colonial powers. She was a critical figure in recognizing and using the power of women to mobilize both men and women to resist colonial power. Her fearless stand against foreign oppression points the way for activists today, wherever they may be.

Yaa Asantewaa is honoured in Africa till this very day for her courage. Her body was eventually returned to Ghana, where she was given a befitting burial.