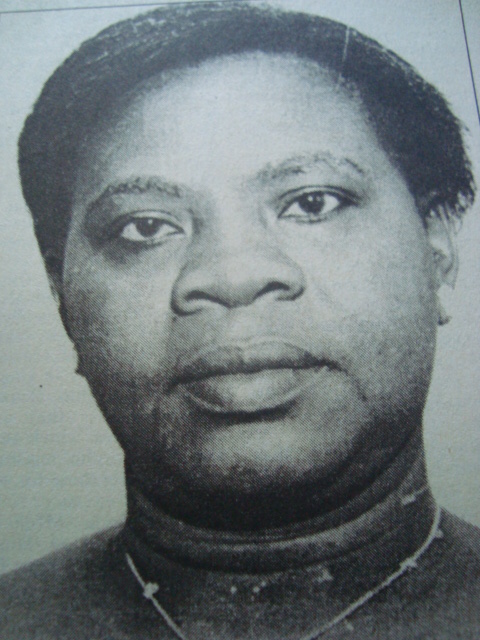 Bibi Titi Mohamed was a major leader in the Tanganyikan nationalist movement. She led Umoja wa Wanawake wa Tanzania (UWT), the women’s wing of the Tanganyika African National Union (TANU), and later became the minister for women and social affairs. Mohamed was a Muslim woman born in Dar es Salaam in 1926 to a businessman […]

Bibi Titi Mohamed was a major leader in the Tanganyikan nationalist movement. She led Umoja wa Wanawake wa Tanzania (UWT), the women’s wing of the Tanganyika African National Union (TANU), and later became the minister for women and social affairs.

Mohamed was a Muslim woman born in Dar es Salaam in 1926 to a businessman father and farmer mother. She received minimal primary school education and, at puberty, like many young Muslim women in Tanzania, entered purdah, a state of seclusion, until she was married at the age of 14 to an older man. After bearing a daughter, Mohamed was divorced. She then married twice more, this time to men of her choosing—a pattern familiar among coastal Muslims and many female TANU activists.[1]

Political activism
Mohamed’s earliest foray into the public sphere was through her involvement in maulidi, a performance celebrating the birth of the Prophet Muhammad, and as the lead singer in an ngoma (a dance and music group). She attributed her later political successes to these involvements, because they gave her significant public exposure, practice in leadership roles and connections within important women’s networks.

Her involvement in nationalist struggles started in 1950. After World War II, as elsewhere in colonial Africa, nationalist movements gained momentum. In 1954, TANU was formed under the leadership of the former schoolteacher and future president, Julius Nyerere. Tanganyika was at the time a UN Trust Territory under British administration. Given her energy and drive, it was inevitable that Mohamed should become a powerful voice in the party. In 1955, she was asked to chair the UWT, and within three months of her appointment she successfully enrolled more than 5,000 women as TANU members. The women’s wing was set to play a big role in the independence struggles in Tanganyika and Zanzibar.[2]

The UWT did a great job selling TANU’s ideals to the masses. It also unified women and gave them one voice in the fight against colonialism. The Mohamed-led outfit did so well that it earned recognition in TANU’s 1964 constitution, which affirmed that there would be a place for women in the party: women would be entitled to all membership rights and every party branch would have a women’s wing. Moreover, men and women members would be treated equally. If the UWT had scored a victory with this affirmation, it was loaded with a sizeable amount of responsibilities: to mobilize women to join TANU; to spread party ideology in both rural and urban areas; to protect the party and its leaders against enemies; to mobilize financial resources for the party; and to nurture women members by empowering them economically, socially and politically.

Since historical records tend to underplay the role of women and, in particular, the role of women leaders such as Mohamed in the ultimate achievement of democracy and independence in Africa, it is important to reflect that women formed the bulwark of initial recruits to TANU because men were hesitant about openly identifying themselves with the party for fear of losing public-sector jobs. This was less of an issue for women, who tended to be self-employed within the informal economy. Women activists were able to use their multiple social and economic networks to raise significant funds for TANU. Additionally, Mohamed proved to be a charismatic force and a powerful speaker. By Mohamed’s own accounts, she mobilized women by going to the ngoma groups and asking their leaders to create space for her to address members:

For example, I talked to Mama Swaleh Kubunju, leader of the ‘Tongakusema’, and she called together all of the ‘Tongakusema’ women. I met them at Livingstone Street at the corner of Kariokoo Street where Mama Kibunju stayed. She said, ‘Titi is calling you, and I have called you for the sake of Titi. Here she is, and she will tell you what she wants’….Then I went to Mama bint Makabuli, the leader of ‘Rumba’. She lives in Narumg’ombe Street near Lumumba Street. She is still alive, but very old. She called the ‘warumba’. And that’s how I went to ‘British Empire’ and to ‘Ratu Sudan’, and to the ‘Sahina’ group—I went to all these groups.[3] (from a 1984 interview with Susan Geiger 1987:16-17).[4]

The multiplicity of ethnicities represented within the ngomas also played an important function within the stated goal of Tanganyikan nationalism: to bring together more than a 120 different ethnic groups into a single nation.

While the records may suggest that women in Tanzania were politicized through nationalist movements and agendas, a counter-argument has been advanced that they were already politicized and loyal to their culture and country.[5] TANU did not necessarily teach women nationalism, instead it provided them with a context within which to advance specific interests, namely freedom from colonialism and gender equity. Women activists evoked, created and performed the nationalism that Nyerere needed to make TANU a credible and successful nationalist movement.

Also, women’s use of ngoma networks was a good tactic, as they were considered innocuous by British colonial officials—and by most African men as well in the 1950s. These groups were open to all women who wished to join, and ended up being highly politicized networks for the exchange of information, announcement of rallies and marches and raising of money for the party.[6] These activities were done under the noses of colonial officials, who, although increasingly jumpy and suspicious of nationalist movements, did not fathom that women’s dance associations might be vehicles of nationalist mobilization. Furthermore, the dance associations expressed and produced nationalism not only through song and dance, but through relationships between and among the societies and the women in them.

Mohamed noted that it was the women who taught Julius Nyerere, then a young Catholic politician with a master’s degree from Edinburgh, how to speak Swahili and how to speak to people. These claims may seem audacious but, from the accounts of the women themselves, they were far more active than men in organizing and mobilizing for the nationalist cause. It was often women who went from house to house, often risking being accused of looking for men.[7] Women mobilized communities and neighbourhoods for mass rallies and visits from TANU leaders, raised money and took many risks for their ideals of freedom and gender equity, even pawning their rings and bracelets to fund Nyerere’s trips abroad.

After independence
When nationalist goals were at last achieved in 1961, Mohamed’s prominent role within TANU was officially recognized. She shared the platform with Julius Nyerere as independence was declared. Thereafter, Mohamed continued her political activism. This included a role in the founding of the All African Women’s Conference, a position as a junior minister for community development, and  leadership of the UWT, into which all women’s organizations had been merged.

Mohamed’s political fortunes shifted in 1965 when she lost her parliamentary seat. In 1967, she resigned from her position on the party’s central committee in protest over a provision in the Arusha Declaration, Nyerere’s plan for African socialism, which banned central committee members from renting properties. For a woman with little education, renting property was one of the few avenues for stable income. She was put on trial and convicted for her alleged participation in a plot to overthrow Nyerere’s government in 1969. Mohamed proclaimed her innocence throughout, and after she had been in prison for two years, President Nyerere commuted her life sentence.

Although she largely disappeared from public life after her release from jail, Mohamed’s legacy is a testimony to the pivotal role played by many uneducated, mostly Muslim women in spreading political awareness and securing independence from British colonial rule in Tanzania. Her particular contribution to nationalism is undisputable. She was one of the most visible Tanganyikan nationalists during the struggle for independence in the 1950s, and was the sole woman in the ranks of Nyerere’s confidants. Indeed she was just as well-known as the president. So close was Mohamed to the founders of the nation that she was one of the TANU members who worked up the crowds at rallies before the president spoke. She understood the power of women to mobilize others to attain the ideals of nationalism. But she saw that in many ways, the expectation was that once independence was gained, women would hand over power and revert to their traditional roles of wives and mothers, and that the energy, vision and power they brought to bear on the struggle would not be recognized for the task of nation-building.[8]

On 5 November 2000, Mohamed died in Johannesburg. Today, one of Dar es Salaam‘s major roads is named after Bibi Titi Mohamed in honour of her great contributions towards Tanzanian independence.