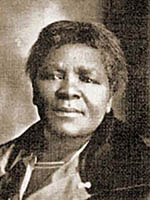 Charlotte Manye Maxeke is known as the first black woman from South Africa to hold a graduate degree, and for her exceptional contribution to the struggle for women’s and workers’ rights, and her lifelong dedication to the struggle for peace and justice. Maxeke was an individual whose every action was expressive of her extraordinary intellect, […]

Charlotte Manye Maxeke is known as the first black woman from South Africa to hold a graduate degree, and for her exceptional contribution to the struggle for women’s and workers’ rights, and her lifelong dedication to the struggle for peace and justice. Maxeke was an individual whose every action was expressive of her extraordinary intellect, determination, courage, principles and love of God. Yet because of her gender, her name is sadly overlooked in the history of South Africa.

Charlotte Makgomo Manye was born in Ramokgopa in the Polokwane (then Pietersburg) District on 7 April 1874. As a young girl growing up in the Cape, Maxeke never allowed herself to become too discouraged by the severe traditional restrictions that bound girls to the home and village. With the help of her parents, she was able to reject such limitations, especially the barriers to formal education. She received a missionary education in the early 1880s.

At eight, Maxeke began her primary school classes and rapidly advanced and outperformed her older classmates. She was exceptionally talented in languages, mathematics and music, and esteemed for her proficiency in English and Dutch. She spent long hours tutoring her less-skilled classmates, often with great success. Music later became the reason for which Maxeke journeyed alone to Port Elizabeth to study at the Edward Memorial School. As before, she excelled and completed her secondary school education in record time, achieving the highest possible grades. During this period, her family moved to Kimberley in quest of employment.

In Kimberley, Maxeke embarked on tutoring and music. She very successfully taught the fundamentals of indigenous languages to expatriate claim holders and basic English to African ‘boss-boys.’ A boss boy is an African placed in charge of a group of African workers, and thus needed to be able to communicate in both English and indigenous languages.  Her true joy, however, was music. Maxeke and her sister, Katie, joined the African Jubilee Choir in 1891 and toured England for two years, during which Maxeke performed for Queen Victoria, allegedly in Victorian costume. Sources state that the sisters were uncomfortable with being treated as novelties in London. Maxeke is also said to have attended suffragette speeches by women such as Emmeline Pankhurst.[1]

With hopes of pursuing more education, Maxeke went on a second tour, now to the United States of America (USA), with her church choir in 1894. When the tour collapsed, Maxeke stayed on and studied at Wilberforce University in Cleveland, Ohio, which was controlled by the African Methodist Episcopal Church (AME).[2] There she was taught by Pan-Africanist W. E. B. Du Bois, and received an education that focused on developing her as a future missionary in Africa. She became the first black woman from South Africa to be awarded a B.Sc. degree. At Wilberforce, Maxeke also met her husband, Marshall Maxeke, who had come to the university from South Africa in 1896. Upon their return to South Africa, she took up a post as the first African teacher at Pietersburg in the Transvaal, while opening the local missionary field for the AME church.

In 1912, Maxeke attended the launch of the South African Native National Congress (SANNC)—later the African National Congress (ANC)—in Bloemfontein and became one of its first women members. She went on to found the Bantu Women’s League of the SANNC in 1918. She authored a lot of the ANC’s earliest literature and her uplifting speeches on behalf of African liberty were described as ‘electrifying, passionate and fiery, yet not inflammatory. Charlotte spoke from her soul with great feeling for all, and everyone listened. It can be said of her that she cared deeply for all mankind.’[3] Although her main concerns were church-related social issues, Maxeke also wrote in Xhosa on women’s social and political situation.

As leader of the Bantu Women’s League, Maxeke led a delegation of women to Prime Minister Louis Botha to discuss the issue of passes for women. She also helped organize the anti-pass movement in Bloemfontein in 1913. She was involved in protests on the Witwatersrand about low wages and participated in the formation of the Industrial and Commercial Workers’ Union (ICU) in 1920.[4] It was her sense of leadership that led Charlotte to respond to a call by the South African Ministry of Education to testify before several government commissions in Johannesburg on matters concerning African education— another first for an African of any gender. Her clear brilliance resulted in a number of job offers, again the first of their kind made by the white government to an African.

After deep deliberation, Maxeke accepted the dual role of probation officer and court welfare officer to Johannesburg’s juvenile magistrate. In the latter role her path was to cross in a most fortuitous way with a young man by the name of Hastings Walter Kamuzu Banda—later the leader of Malawi. Banda was attempting to secure a passport to enable him to journey to the United States to take up an AME church scholarship at Wilberforce University. With the self-assurance and authority of solid personal experience, Maxeke asked the magistrate to approve his application. Widely known and highly respected by Africans and Europeans alike, Maxeke’s word carried great weight and the application was thus approved.

During her years in Johannesburg, Maxeke co-founded with her husband the Widow’s Home and the Foreign Missionary Society. Along with the AME Church’s Widow’s Mite Society, these two groups were responsible for funding and educating thousands of young Africans, many in the United States and Britain, and also for caring for sick and indigent Africans at home. Maxeke also set up an employment agency for Africans in Johannesburg and was involved in multiracial movements. She addressed the Women’s Reform Club in Pretoria, an organization for the voting rights of women, joined the Joint Council of Europeans and Bantus, and was elected president of the Women’s Missionary Society.[5]

The various welfare organizations that Maxeke established, concerned with improving life in the townships, are a large part of her legacy. While somewhat conservative—emphasizing domestic duty, family life and Western ‘refinement’—they nevertheless created very broad networks between women from a range of class backgrounds.[6]

Maxeke has often been honoured as the ‘Mother of Black Freedom in South Africa’, and an ANC nursery school in Tanzania was named after her. Throughout her life, Maxeke championed the potential of African people, especially women, to stand up and take control of their own affairs. Her work was an important turning point for women’s organizing in South Africa. The Bantu Women’s League was founded as a result of the women’s deep understanding of the challenges facing women in South Africa, in particular black women.[7] It was meant to represent all black women of South Africa, irrespective of class and education. Consequently, women fought for their rights and the rights of all oppressed people. The Bantu Women’s League in many ways laid the ground for women’s organising from that point onwards.

Charlotte Manye Maxeke passed away in Johannesburg on 16 October 1939 at 65. At her funeral at Klipstown, her eulogy ended with the words ‘She was everyone’s friend and no one’s enemy.’