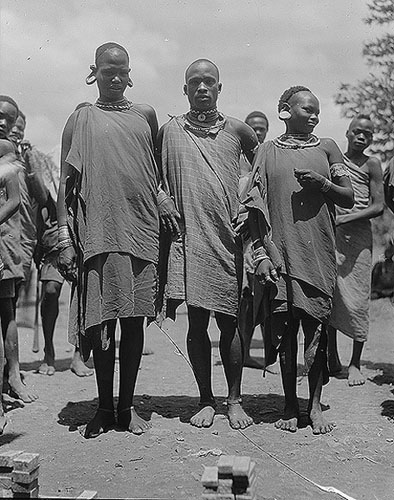 There has been considerable scholarly focus on the nature of women’s participation in nationalist struggles. The importance of this focus is to recognise women’s political agency and not relegate women to supporting roles in what tend to be understood as men’s political struggles. The colonial literature has presented two caricatures of African women’s involvement in […]

There has been considerable scholarly focus on the nature of women’s participation in nationalist struggles. The importance of this focus is to recognise women’s political agency and not relegate women to supporting roles in what tend to be understood as men’s political struggles.

The colonial literature has presented two caricatures of African women’s involvement in nationalist struggles: women as ignorant peasants threatened into feeding resistance fighters; or urban prostitutes, stripped of tribal affiliation, with nothing to lose.[1] The reality, however, is more complicated.

This excerpt highlights a particular moment of anti-colonial mobilisation among Kikuyu women in Kenya. It is important to point out that this mobilisation did not suddenly happen; rather Kikuyu women’s had always exercised a degree of political agency in their communities. Along with men, Kikuyu women were adversely affected by colonial legislation depriving them of land, particularly as women performed most of the agricultural labour for the overpopulated reserves on which they lived, and were often used as seasonal workers on coffee plantations, too. Being forced to perform this communal labour and to pay taxes according to the laws of 1910 and 1934, greatly troubled women.[2]

The women’s revolt started after the arrest of Harry Thuku, one of the founders of the Young Kikuyu Association (later renamed the East African Association, EAA) in 1921. Thuku was outspoken about the range of injustices attributed to the colonial government and, as a result, mobilised support not only in Kenya but also among influential and sympathetic people in England. Thuku was particularly vocal about the government’s doubling of the hut and poll taxes,  reduction in African wages, oppression by tribal police and forced labour of women and children especially.

It was this last grievance that particularly led women to support Thuku. African chiefs were ordered by the colonial authorities to seek out women and girls to work on European plantations, whose owners deliberately ignored the documented evidence of the indignities suffered by these women and girls. Gross abuses ensued: women were beaten, detained away from their homes and sexually molested by tribal retainers, as a result of which a large number were impregnated.[3]

At a meeting in February 1922, Thuku told his followers to refuse to pay taxes and to stop working on government projects. By this time, his ideas constituted a direct challenge to colonial rule, and he was arrested.[4] After Thuku’s arrest, the EAA called a general strike, mobilising a crowd of more than 7,000—mostly men—to march to the police station to secure his release. Only 150 women attended this march. When the crowd was requested to disperse, the women became angry because they felt the men were capitulating to the authorities.[5]

In an act of traditional symbolism, one of the women in the crowd pulled her skirt above her shoulders while at the same time ululating and heaping verbal scorn on the men, implying that the women would do what the men should have. Others followed. By raising their skirts, the women were offering to exchange dress with the men and take their trousers —a symbol of manhood. It was a well-understood insult.[6] The symbolism was effective in taunting the men and signalling the women’s repudiation of their authority, and the women’s challenge and the sound of their ululations stopped the larger crowd from dispersing. In the ensuing agitation, the crowd lunged forward, the police opened fire, and 21 people, four women, were killed. Many others were injured.[7]

Although short-lived and unsuccessful in releasing Thuku, this incident was a strong testimony to the latent political dynamism and determination of Kikuyu women to defend their rights. The women had used a ritual practice to score a political point; an exclusively female institution had challenged both traditional male monopoly on political power and colonial authority. The bravery and ingenuity of the women was enshrined in the Kanyegenyuri song that inspired later female militancy. Their actions also showed that while the women did not wield as much power as men, they had the critical capacity to mobilise themselves quickly and over a wide area, and had the institutions and traditions to deploy when necessary.

Some speculate that the unity shown by the Kikuyu women at this point may have been as a result of ‘oathing.’ Oathing was a practice that involved members swearing their allegiance to the nationalist cause. It undoubtedly raised women’s levels of political consciousness and helped create the discipline and unity required to spearhead the attempt to rescue Thuku. The EAA was apparently the first organisation to oath women. While a step in the direction of treating women as equals, paradoxically, the organisation was at the same time denying women membership.

There is ample evidence of Kikuyu women coming together in succeeding decades to protect their interests, including by organising strikes and trying to better their work conditions. In 1934, thousands marched on the Meru administrative station and demanded that corpses buried under the Native Authority Ordinance be exhumed, because the burials had caused a drought. The informal action of women during this period included vocal protest, as they sang scurrilous songs about chiefs, retainers who were forcibly obtaining them for labour, and the government’s policies.[8]

In 1938, a number went to Nairobi to object to the planting of grass ‘wash-stops.’ The following year, a group looted an Indian shop whose owner, they felt, was not giving them a fair price for their agricultural produce. In the same year, another group demanded the sacrifice of a sheep from an old man whose son had killed a man, which they believed was causing a poor harvest.

Yet another instance of protest, known as the ‘revolt of the women’, occurred between 1947 and 1948. It involved the women of Fort Hall and focused on the government’s soil conservation scheme. The women, who had been doing the bulk of land terracing work, refused to participate any longer, and their boycott brought the project to a standstill. The District Commissioner found it impossible to believe that the women had acted on their own and concluded that they must have been spurred on by a clique of young urban men intent on sabotaging the administration.31 His opinion was common among Europeans.

Such ventures into the political arena by Kikuyu women are all the more remarkable because, as a group, women in Kenya had largely been excluded from modern education and from any formal participation in the colonial political system. They confronted an informal coalition of African and British male attitudes. At an institutional level, Kikiyu women became frustrated with the fact that their activism was reduced to supporting men. In 1930, they split from the EAA and formed their own association, the Mumbi Central Association.[9] When conditions demanded it, then, Kikiyu women showed that they had a strong political voice.

[4] Wipper, A. (2000). Kikuyu women and the Harry Thuku disturbances: Some uniformities of female militancy. Retrieved from http://www.uoguelph.ca/~terisatu/MauMau/index.htm