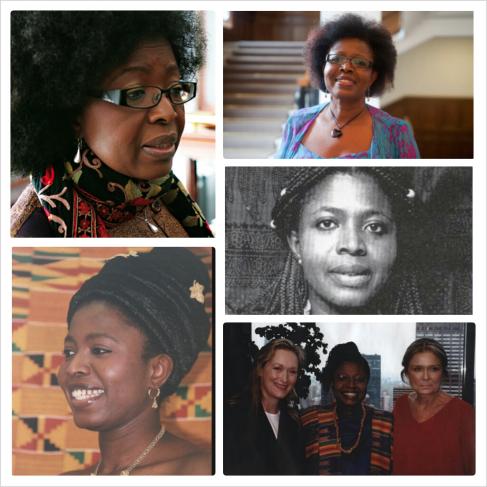 “Remembering Mama Efua” By Kobby Graham “If you ever argue with your wife, chances are that I’ll always side with her. So I suggest you pick someone you won’t argue with…” Mom used to say this to my brother and I a lot; never without a mischievous twinkle in her eye. We always laughed it […]

Kobby, Efua’s son, remembers his Mom. He is a lecturer at Ashesi University in Ghana, as well as a DJ and writer with Accra's NKENTEN collective.

“If you ever argue with your wife, chances are that I’ll always side with her. So I suggest you pick someone you won’t argue with…”

Mom used to say this to my brother and I a lot; never without a mischievous twinkle in her eye. We always laughed it off, but we knew she was only half-joking: Mom always, always championed the cause of girls, even when they did not know their causes needed championing. I remember once traveling to visit Mom with a girlfriend who (bravely) told Mom she did not see the point of feminism. They were still talking when I went to bed. By morning, my girlfriend had changed her mind.

I remember another time, as a teenager, listening to Mom arguing with someone over something I no longer recall. I had an opinion on the matter and, as soon as there was a gap in their conversation, I expressed it. The man Mom was arguing with immediately shut me down, reminding me how rude it is for children to speak when adults are doing so. Mom however insisted that I speak up. It was a position on which she was consistent: if there was ever to be  change, the youth (who will benefit from it) must have a hand and a say in it. Encouraging the young to have a voice does not automatically mute the voices of the elders.

Mom would have been an inspiring, empowering mother to a daughter. Saddled with two sons instead (who she flooded with unquantifiable love regardless), she seemed to make it her mission to inspire and empower any young woman who drifted into her orbit. Assistants, volunteers, step-daughters, nieces, in-laws, strangers… it didn’t matter. In spite of the awe in which she was often held, Mom always made herself accessible to young people. She loved their energy, creativity and optimism. In exchange, boys would get tough lessons and advice served up with wit and the warmest of smiles, while girls received encouragement, laughter and an induction into sisterhood.

Mom tirelessly championed African activists on the ground, fighting in their own spaces and communities for change and an end to FGM. To Mom, the fight against FGM was about more than ending one harmful practice: it is part of a larger shift that is happening as our cultures grow and the roles of girls within our cultures grows too.

As girls across the continent slowly gain access to education and employment, their options, outcomes, rights and responsibilities change. Educated in Ghana in the sixties before being awarded a scholarship to continue her studies abroad as a teenager, Mom was perhaps part of the first wave of African girls to start having to live with the consequences of these social changes and new responsibilities. She thought it was important to share her lessons, mistakes and triumphs with the next generation of African girls and believed strongly that this new generation was the one that would get the balance right. She believed that although they are not often in the room when talks happen, this is the generation that will end FGM.

I suspect that no tribute to Mom and the countless African girls and women who have fought in their own ways and spaces for change would ever be greater.